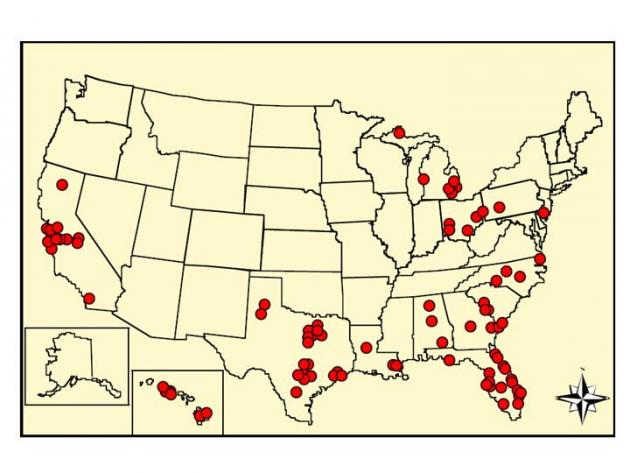 Figure 1. Locations of municipalities in the United States that have reported problems with feral hogs in suburban and urban areas since 2000. Illustration courtesy of Jack Mayer.

Since 2000, feral hogs (also called wild hog and wild pig; Sus scrofa) have started showing up in numerous suburban and urban neighborhoods across the United States (Fig. 1).  Prior to that time, such appearances by these animals in developed areas had been a very rare event.  In fact, such recently increasing incidents are actually part of a global phenomenon.  Similar to the situation in the United States, there has been a comparable recent increase in incidents involving these animals in urbanized areas in numerous other parts of the species’ native and introduced global range.  Individuals belonging to this species can potentially be very destructive and extremely dangerous animals.  Feral hogs can also be very difficult to either control or manage.  Given these factors, there are unique challenges in dealing with feral hogs anywhere; but that is especially true in an urban or developed setting.

As the populations of these animals have spread and increased in size in this country, feral hogs have had to expand their distribution into habitats not previously occupied by this species.  Given access to adequate food, water, shade and escape cover, feral hogs can live almost anywhere.  Further, these animals are intelligent, secretive, and adaptive ecological generalists that are capable of exploiting a wide variety of both habitats and forage resources.  Although perhaps not ideal, developed areas have a lot of potential for supporting populations of these animals.  In addition to the less populated and more vegetated suburban areas, feral hogs have been able to spread into more heavily urbanized areas by using available habitat in the form of drainage corridors and extensive greenway systems.  Foraging out of those travel ways, these animals are then able to find both natural (vegetation) and man-made (garbage) food resources to sustain themselves.

As in other areas and habitats that they occupy, feral hogs can cause a lot of damage in suburban/urban areas with their foraging activities.  The most common foraging impact observed is rooting.  This damage in urbanized locations is primarily to grassed areas such as lawns, parks, golf courses, sports fields, cemeteries, and levees/dikes (Fig. 2).  In addition to the damaged turf, rooting can also cause other physical impacts to the affected landscaped areas (erosion, slope failure, down-gradient sedimentation).  Foraging by feral hogs in developed areas can also result in the depredation of ornamental species planted in landscaped areas.  Further depredation impacts by these animals have been observed in backyard fruit and vegetable gardens. Both of these increase input costs for the property owner in replacement of plants.

Feral hogs have also been observed to disperse garbage and refuse as a result of their foraging activities, creating both litter and sanitary issues (Fig. 2). 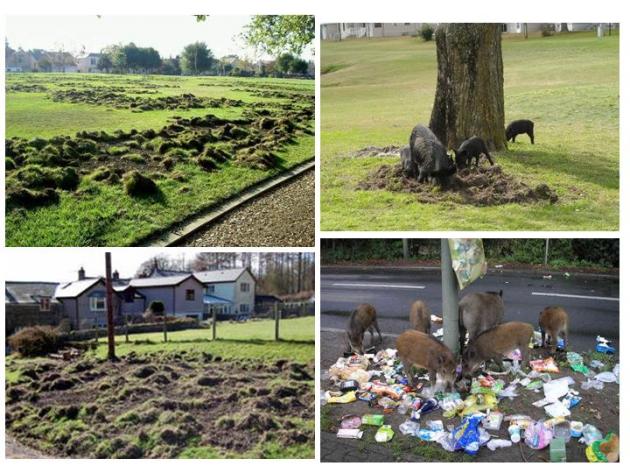 The presence of feral hogs in urban areas with traffic has resulted in vehicle collisions with these animals.  As with these accidents elsewhere (see Feral Hog-Vehicle Collisions), there has been a recent increase in these collisions on both suburban and urban roadways.  The consequences of these accidents can be very serious with respect to the property damage to vehicles and personal injury to the drivers and passengers of those vehicles.  In addition, reports of human fatalities resulting from these accidents have also been increasing.  Both multiple animals and multiple vehicles have been involved in a number of these accidents in developed areas.

Unexpected, physically-close, sudden encounters with feral hogs in suburban areas have resulted in attacks on both humans and their pets (see Feral Hog Attacks on Humans).  Such incidents are rare but increasing.  Feral hogs are potentially dangerous animals and can be very aggressive when they feel either cornered or threatened.  In addition, feral hogs do not seem to like dogs.  As such, the presence of dogs being walked by their human owners has been suggested to represent a hazard with respect to instigating feral hog attacks.  In a number of these incidents, the human owners have been injured in attempting to save the pets from the attacking hog(s).

Feral hogs have also been reported to damage a variety of property in urban areas.  There are frequent impacts to fences in locations where these animals wanted to cross such barriers.  Feral hogs will also damage lawn irrigation and sprinkling systems, digging up and breaking the piping associated with these systems to get at the water contained in these lines.  Lastly, there have been instances of feral hogs entering commercial businesses or private residences.  During such “break-ins,” these animals typically cause a lot of property damage trying to escape from these confined surroundings.  In a few cases, the human occupants of these structures have been injured by these hogs in trying to chase the animals out of the building.

Since feral hogs can also serve as disease reservoirs/vectors, there is also a concern about the potential for disease impacts associated with these animals in urban areas.  The transmission of these pathogens would be through either direct contact or water-borne pathways.  These diseases could potentially impact either humans or animals (for example, pets or livestock).  Contact between feral hogs and both humans and their animals has been increasing in these urbanized areas (for example, people trying to hand feed these hogs).  In general, the primary disease concerns center around brucellosis (human and animals), E. coli bacteria (humans), and the pseudorabies virus (animals).  As with other wild mammals, rabies is also a potential concern, but reported infections of that virus are very rare in hogs (See Feral Hog Diseases and Health Risks).

A recently documented issue associated with the presence of feral hogs in urban areas has been water quality impacts.  As elsewhere, these animals will foul urban water resources by rooting, wallowing, defecating, and urinating in these aquatic areas.  The urban resources in question would include potable waters (for example, water supply reservoirs and impoundments), irrigation waters, and natural waters (for example, streams, ponds, and lakes).  The damage resulting from these feral hog activities would include disease/pathogen transmission and perturbations to water chemistry parameters.  The effects of such impacts would be variously realized by the area’s human, wildlife, and fisheries populations.

The control and management options available to those municipalities trying to deal with urban feral hogs are limited compared to those used in more rural areas (Fig. 3).  Given the close proximity and higher density of people, pets, and structures, lethal removal methods may be difficult to employ.  Both shooting and dogging present concerns with their use for hog control in these developed areas.  To resolve a few cases, law enforcement or animal control sharpshooters have been called in to deal with rampaging feral hogs.  In heavily urbanized areas, the limited options available for control would most likely include only trapping (the type/style selected based on concerns for impacts to non-target species such as pets) and exclusion (fencing or other hog-proof barriers).  Thought must be given to the fact that the use of such control methods will often be in view of the general public.  Because of that, the use of accepted humane methods should always be considered.  The same legal and political challenges associated with dealing with any urban wildlife management issue would also come into play with feral hogs. 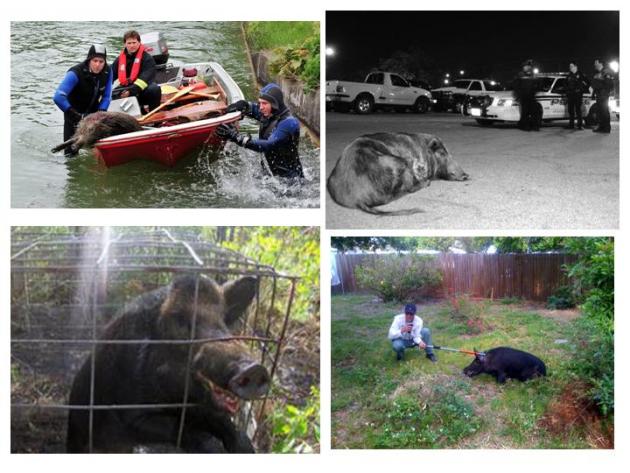 Dealing with the public is an added complication associated with trying to control or manage urban feral hogs.  These animals are perceived to be tame by many members of the public.  As such, additional problems are created by well-intended individuals who begin to feed the feral hogs that have started showing up in their neighborhoods.  This only gives these animals both a reason and a basis to stay in those urbanized areas.  In addition, some factions within the public will actively work against any control efforts (for example, releasing feral hogs that have been caught in a corral trap).

The economic impact to these municipalities because of the presence of urban feral hogs has not been quantified to date.  However, all of the aforementioned types of damage have a cost associated with them, either to a specific private individual impacted (for example, in a feral hog-vehicle collision) or to the public sector as a whole (for example, damage to public property or lands).  As the numbers of these animals in developed areas increase, so will these costs.

Urban feral hogs represent a serious problem that is on the increase.  The damages caused by these animals to date in urbanized areas have been widespread and varied.  Specifics about the behavior of these animals in developed areas are not well understood (for example, how do their movement patterns and home ranges vary from those reported in rural areas?).  The solutions to the urban feral hog problem are at best a work in progress at this time.