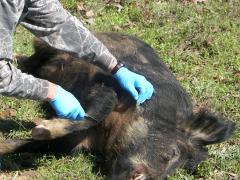 Feral Hogs can carry and/or transmit several diseases to wildlife and/or humans.  Three diseases that cause the most concern are swine brucellosis, psuedorabies, and tularemia, although, feral hogs harbor other diseases as well.

The bacterium swine brucellosis (Brucella suis) is transmitted by breeding (semen, reproductive fluids) and ingestion of the bacteria (placenta and aborted fetuses, milk and urine).

Swine brucellosis is often called undulant fever when humans contract it because body temperature rises and falls along with flu-like symptoms.  Symptoms in swine include abortions, lameness, arthritis, abscesses, infertility, and sometimes death.

Pseudorabies (Herpesvirus suis) can not be contracted by humans; however, domestic livestock and some wildlife species can be affected.  The name psuedorabies implies this disease is a form of rabies, but it is actually caused by a herpes and not a rabies virus.  Transmission of  pseudorabies is by nose-to-nose or sexual contact, and ingestion or inhalation of the virus.  Some symptoms can include abortion, mortality among piglets, coughing, and fever among adults.  Itching followed by incessant scratching and biting of the skin may occur with affected cattle and dogs.  Neurological symptoms may also occur, and the endpoint is death.

Tularemia (Francisella tularensis), also known as rabbit fever, can be contracted by humans.   Tularemia is transmitted by direct contact through a wound, eating infected meat, and by ticks and biting flies that harbor this disease.  Flu-like symptoms along with swollen lymph nodes are some of the symptoms when humans contract tularemia.  Pneumonia, blood infections, or meningitis can be caused by severe cases.

Tularemia can survive weeks in wet environments.   Texas Tech University researchers recently tested 130 feral hogs, and 50% of those tested hogs in Crosby County and 15% in Bell and Coryell Counties showed past exposure or were currently infected with tularemia.

Feral hog fecal material can transmit additional diseases, which can pose a problem when supplemental feed for livestock or wildlife is placed on the ground, increasing the chances of fecal contamination by hogs.  Bacterial diseases (e.g., swine brucellosis and tularemia) are not generally spread this way, but other diseases such as salmonellosis, foot rot, intestinal bacteria, viruses, and parasites are commonly transmitted by this route.

Protecting Yourself from Feral Hog Diseases

What diseases do feral hogs carry and transmit?