Do You Have Feral Hogs?

Controlling new populations of feral hogs (also called wild hogs or wild pigs; Sus scrofa) is most successful if such efforts can begin immediately following their appearance.  It is important to rapidly identify their presence in areas where feral hogs had previously been absent. Feral hogs can be secretive in their behavior (see Feral Hog Behavior), shifting activity patterns to avoid being seen by humans. Their presence can be readily identified from field sign that these animals leave. 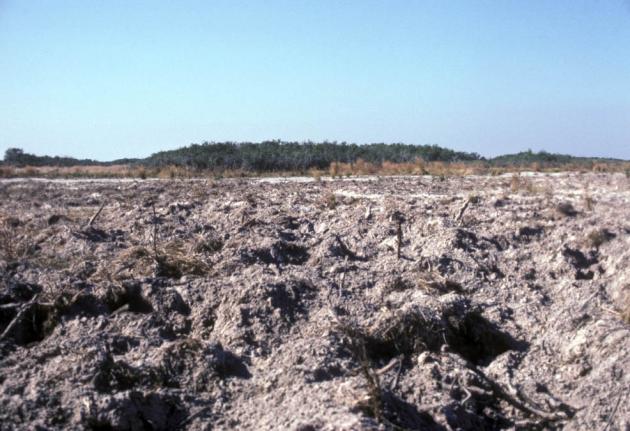 Figure 2. Rooting by feral hogs can be extensive, causing soil erosion and sedimentation in streams, and ruining livestock pastures.

The most common and evident field sign created by feral hogs is rooting (Figure 2).  Rooting signs are, very simply, the result of feral hogs foraging for food located in either the leaf litter or below the ground surface.  Rooting is done by all feral hogs, regardless of sex or age.  Rooting is done year-round; however, the frequency and intensity can be seasonal.  Feral hog rooting can be classified into one of three categories including: (1) pit rooting, (2) trench rooting, or (3) area rooting.  Pit rooting involves the directed foraging for a specific localized food item.  Such rooting can vary from a shallow hole down to a steep‑sided crater, up to almost 50 inches deep.  Trench rooting consists of an elongate excavated ditch typically one or more meters in length.  The last category, area rooting, entails large areas of continuous rooting.  This can be from a few square yards up several acres in size.  Several factors are involved in this variability, including the target food resource, the moisture content of the soil, and the age of the animals involved.  Adults of both sexes tend to root systematically in deep regular patterns.  Sub-adults and yearlings root more shallow and irregular patches.  Piglets and juveniles dig up shallow spots in an erratic and haphazard manner.  In general, shallow rooting is the predominant type of this field sign found.  Rooting can be found in soils that range from relatively dry to completed inundated conditions. 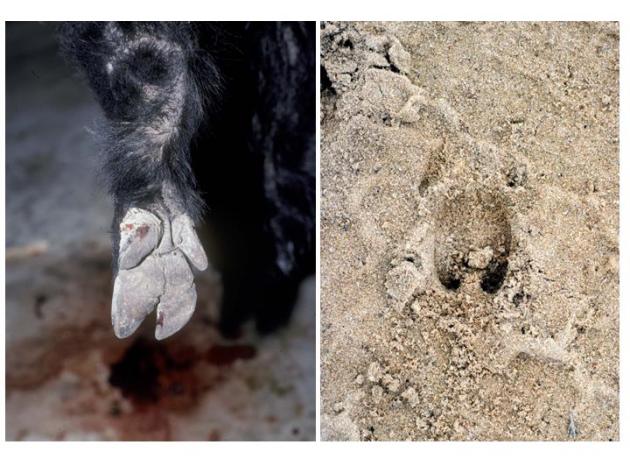 Figure 3.  Front foot and front-foot track from a feral hog.

Feral hogs leave a cloven-hoofed print. Often the lateral toes or dewclaws are evident (Figure 3).  The lateral toes are located lower on each leg than other hoofed mammals. Feral hog tracks tend to be round or circular in overall shape, and are about as wide as they are long.  The central toes of feral hog tracks are more blunt/rounded and splayed away from the central line of the print, and form what could be described as a rounded “W.”  Tracks of adult feral hogs range from 2 to 3 inches in length and 1½ to 2 inches in width.  The hooves or toes on the front feet are slightly larger, being physically longer and proportionately wider than those of the rear feet.  The tracks of younger animals are smaller replicas of the adult tracks.  Tracks of mule-footed feral hogs (see Physical Characteristics of Feral Hogs) exhibit a single rounded central triangular print flanked by the lateral or dewclaw prints.

Feral hogs use the same trails as other local big game. Look for feral hog tracks in visibly well-worn or cleared paths through brush.  These trails are most obvious when they intersect roads or other open habitats.  Most feral hog trails follow the shortest possible route from one point of interest (e.g., bedding area, water source) to another, regardless of the topography or vegetation.  Feral hogs will create shorter or lower-topped tunnel trails through thick underbrush than deer typically do.  In some cases, trails may be exclusively used by feral hogs.  For example, trails that go straight up a steep hill indicate the presence of feral hogs.  Other animals (e.g., deer and cattle) tend to make trails that angle up such steep slopes. 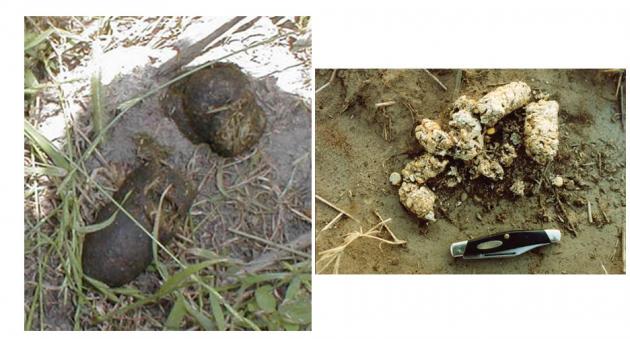 Fig. 4.  Illustration of the variation seen in feral hog scats.

Scat or droppings of a feral hog can vary widely depending on the material eaten and size of animal that produced it (Figure 4).  In general, most are irregularly shaped lumps approximately 1-2 inches thick and 3-9 inches in length.  The color may vary from light tan/yellow to black and may have a purplish hue when fresh.  Feral hog scat resembles a segmented sausage composed of compacted fecal material.  The consistency of the scats will also vary with the foods being consumed.  Oak acorns will produce scats that are hard and black in color, with scattered pieces of brown acorn shell present throughout the fecal material.  Such scats dry very quickly after being produced.  Persimmons or plums produce scats that are soft and lighter brown in color, with scattered fragments of black or reddish material present. 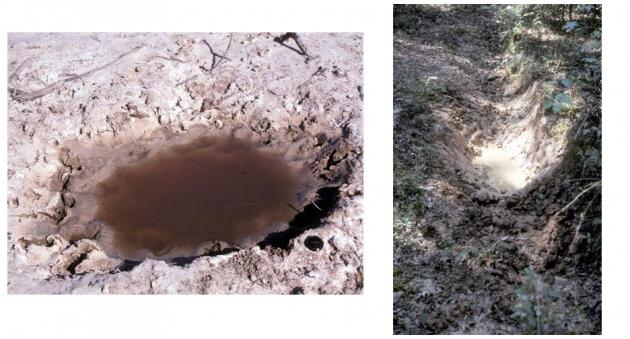 Feral hogs use wallows (Figure 5) because of the need to cool themselves and get relief from external parasites and biting insects.  Wallows are typically shallow, muddy depressions that are oval to oblong in shape.  Depending on soil type, the sides of a wallow are often smooth where the animal has rolled.  Wallows can be found in a variety of places including low, muddy spots in streams, ditches, wetlands, or ponds/lakes/impoundments, as well as depressions or low spots in well-traveled foot trails and unpaved or old roads.  Although wallows vary in size, typical feral hog wallows are about 2-7 ft in length, 1-5 ft wide, and 1 ft or less in depth.  The shape is dependent upon the size of the animal or animals using any one specific wallow.  The largest wallows appear to have been used by several animals at one time.  Although most often used during the hot summer months, wallows are used by these animals year-round. 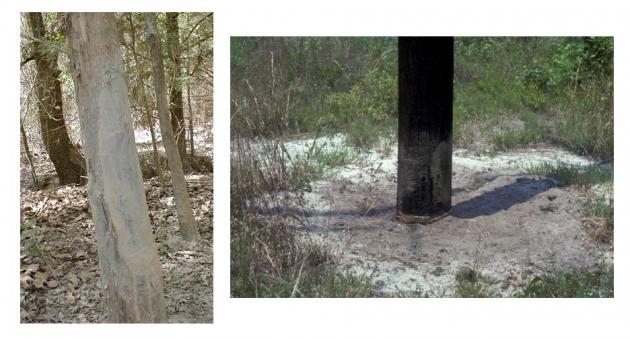 Figure 6.  Feral hog rubs on a tree (left) and a telephone pole (right).

Rubs are where feral hogs scratch their bodies against trees, fence posts, rocks, telephone poles, or other immovable objects (Figure 6).  Tree rubs are found near trails that feral hogs use regularly, especially those near wallows. Rubs are muddy, smoothly‑rubbed bands typically between 5 and 40 inches above ground, though they can be as high as 55 inches. Rubs often completely encircle the structure.  Feral hog bristles can be found in mud or caught in the rough surface of the structure being rubbed.  Feral hogs will travel long distances to a particular pine tree or telephone pole to use as a rubbing post.  In some cases, certain trees are used so often that the bark is completely rubbed off.  Sometimes such trees are killed.

Feral hogs leave a variety of feeding signs depending on the food or foods that any one animal is seeking.  Rooting leaves obvious signs of feral hog presence.  Direct foraging on agricultural crops (for example, corn plants knocked down and trampled), pine/hardwood seedlings, lateral roots of pine trees, prickly pear cactus pads/fruits, eggs of ground-nesting birds or reptiles, and carrion can all be used to identify the presence of feral hogs. Tracks associated with these signs can be used to identify feral hogs.  Foraging feral hogs will displace and dig/chew into decomposing logs to locate insects and small vertebrates.

Although feral hogs actively scent mark, identifying these in the field is difficult.  Of four types of feral hog scent marks, two that leave readily-identifiable evidence are from metacarpal or tusk glands.  Scent marking with the metacarpal glands results in a bare spot of ground with pawing marks in parallel positions in the open area.  These can be easily confused with a whitetail buck’s scraping activity.  Feral hog tracks within or close to the bare spot is evidence of their presence.

Trees or other scent posts marked with tusk glands can be difficult to identify.  Trees tusked by male feral hogs result in bark removal and exposure of the inner wood.  Tusked trees are typically small in diameter and found along trails frequently by mature boars.  A tusked tree is somewhat similar in appearance to a buck rub. The two differences are that scent posts tusked by boars are typically not as intensely cut up (with a shredded or frayed appearance to the bark) or as high up on the post as buck rubs. Frequent tusking produces a distinct “paisley” pattern in the bark. 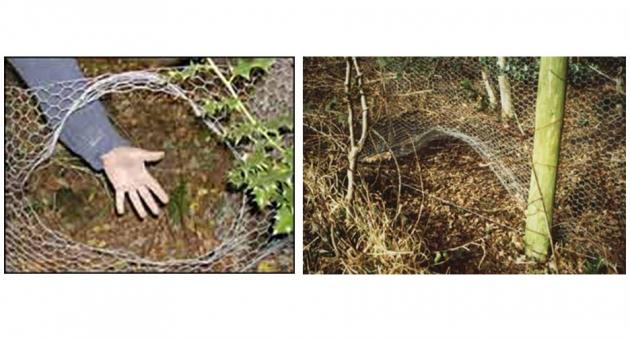 Feral hogs have strong neck muscles and can lift heavy things with their snouts. They create openings under or through wire fences in an arch shape (Figure 7). Bristles become caught in twisted barbs of strand fencing or joints of woven wire fences.  Such hairs are clear evidence of feral hogs, though hairs can last for several months in this condition. Remove hairs when observed in fencing, and check for new hairs periodically to determine whether hogs are currently present. 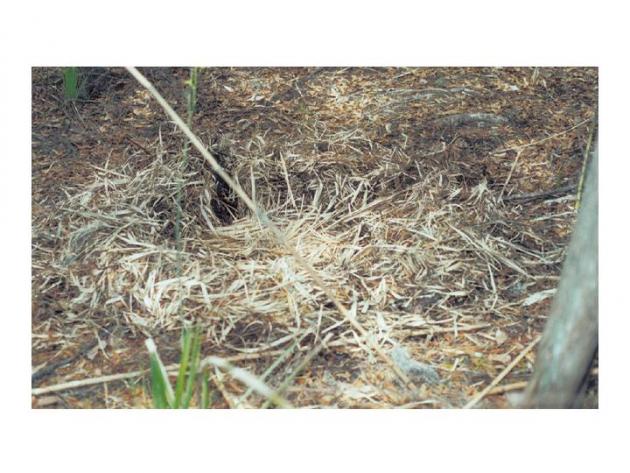 Feral hogs build farrowing nests and resting/loafing beds. These structures share the same general characteristics and can be difficult to tell apart.

Farrowing nests are rooted-out areas typically round to oval in shape (Figure 8).  Nests range in size from 3 to 8 feet long, 2 to 7 feet wide, and 2 to 7 inches deep. Sows excavate these shallow depressions for giving birth to their young.  Sows line the nests using readily-available material in close proximity, or some nests are unlined. Nests found in colder or open habitats are more elaborate than those found in warmer or forested habitats. Elaborate nests can have dome-like covers made of vegetation piled to 4-feet high.  Nests typically are constructed around existing woody vegetation or structures.  Examples include the base of large live trees, underside of the root mat of a large fallen tree, next to fallen tree trunks/logs, or in a man-made log pile. Sows most often select nest sites with protective overhead and ground cover in secluded, undisturbed places.  Some nests are built in open understory with no visual protective cover or screening from potential predators.

Feral hog resting or loafing beds are used by adult or immature animals for resting.  Occasionally, a loafing bed with a large, deep pile of plant material will be encountered in late fall, winter, or early spring. As many as 15 pigs can occupy one bed.  The shape of a single animal bed is similar to a farrowing nest.  The size and shape of a multiple-animal bed varies depending on the number of feral hogs using the structure. Compared to farrowing nests, beds may or may not be excavated depressions.

View all posts about “Field Signs”