Feral hogs can live almost anywhere, especially in temperate and remote riparian environments in the western hemisphere. Typically these animals do not inhabit deserts, high mountain areas with substantial winter snowfall, or intensive agricultural areas where cover is scarce. Even then, a small number of feral hogs have been discovered avoiding the heat under dunes in the deserts of the southwestern United States, as well as tunneling through deep snows in Canada. 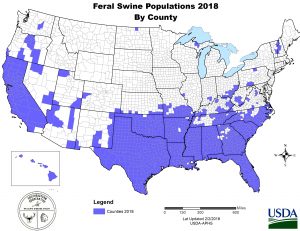 The distribution of feral hogs in the United States is monitored via the National Feral Swine Mapping System (NFSMS).  As of 2019, 35+ states have reported established feral hog populations.  Established populations are defined in the NFSMS as those having been present for two or more years and with evidence of reproduction.