Vehicle collisions with feral hogs (also called wild hogs and wild pigs; Sus scrofa) are known to occur in the United States.  As the population size of these animals increases,  the frequency of feral hog-vehicle collisions increases concurrently.  In some locations of high incidence for these accidents, feral hog crossing signs have been erected to warn motorists (Fig. 1).  In general, feral hogs are large animals (for example, 200+ lb) with a relatively low center of gravity.  As a consequence, collisions with these animals represent a serious safety hazard and can result in personal injuries and fatalities for the human occupants of the vehicles involved. 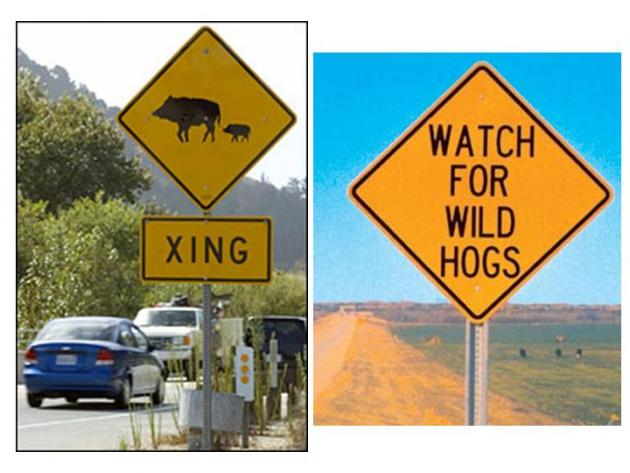 Vehicle collisions with feral hogs involve both sexes and all age classes of these animals.  The number of feral hog roadkills in an area is positively correlated to the local population numbers.  However, the sex/age composition of the animals involved does not always reflect the population structure (see Feral Hog Population Biology).  Typically only one feral hog is involved in most collisions; however, multiple animal collisions (for example, up to as many as 23 animals in 1 collision) have been documented to occur (Fig. 2).  As the number of animals per collision increases, the average age and size of the individuals involved decreases.  The percentage of males in single-animal accidents is significantly higher than females.  Feral hog-vehicle collisions can occur year-round and throughout the 24-hour daily time period. However, frequency of these collisions is highest during the fall and winter months and at night. Annual reduction in a feral hog population resulting from these accidents varies from 0.1 to 5.0 percent.  Human injuries are infrequent but can be potentially serious.  A number of human fatalities from collisions with feral hogs have been reported in the United States during the past few years.  The annual cost of property damage and personal injury associated with feral hog-vehicle collisions in the United States is estimated to be $36 million.  As populations of this invasive species continue to increase, this potential economic impact to the nation could become substantial. 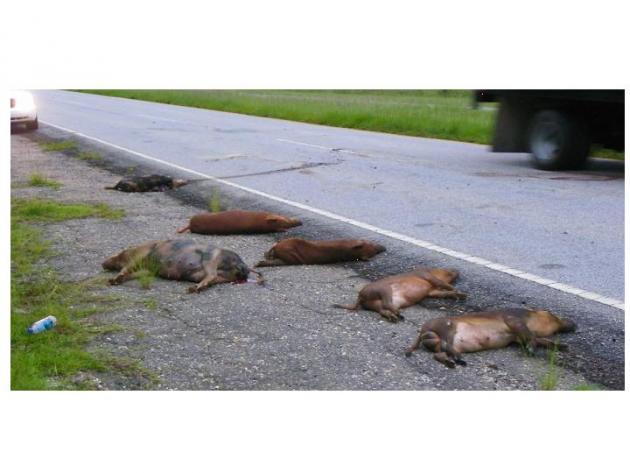 Figure 2.  Six of eight feral hogs killed in one early morning collision with a vehicle in South Carolina.

In addition to collisions with motor vehicles, feral hogs have also been involved in collisions with both trains and aircraft.  Such collisions with trains have been documented to occur in North America, Western Europe, and Asia.  In 1988, two feral hogs attempting to run across the runway at the Jacksonville International Airport in Florida collided with an F-16 fighter jet that was attempting to take off, destroying the $16 million aircraft in the subsequent crash.  A similar accident happened a year earlier in Pakistan with a wild boar colliding with another F-16 in the process of taking off, resulting in the nose wheel being knocked off and the jet being destroyed in the subsequent crash.  Unlike vehicular accidents, collisions with these other modes of transportation are typically uncommon to extremely rare.