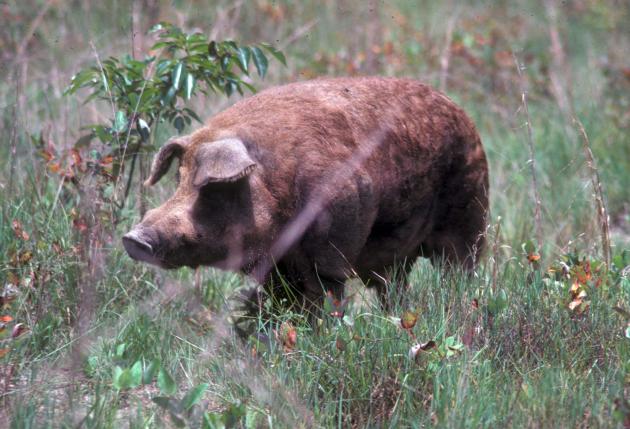 Figure 1. Appearance of a typical adult male feral hog (i.e., a wild hog from a population that is solely of domestic ancestry).

The introduced feral hogs (also called wild hogs; Sus scrofa) in the United States exhibit a broad range of physical characteristics.  To a large part, this variability stems from the widely diversified ancestral origins of these animals. In general, both free-ranging domestic swine (i.e., feral hogs; Fig. 1) and introduced Eurasian swine bloodline comprised the initial types of Sus scrofa established in the United States.  Being the same species, hybridization takes place wherever these two initial types of wild hogs occur in the same area (Fig. 2).  At present, populations of these animals exhibit a spectrum of physical characteristics varying from animals that resemble domestic swine to ones that are consistent with pure Eurasian swine bloodline.  Most, however, are intermediate in appearance between these two parental types.

In general, feral hogs are all medium‑to‑large sized animals, with a barrel-like stout body (often with flatten sides), short and slender legs, and a relatively long, pointed head supported by a short neck.  The eyes are small.  The ears are relatively large, broad structures, which taper to a point at the tip.  Each foot has four toes, of which the lateral toes are shorter and positioned higher up the limb than the central pair.  The tail, which can vary from straight to curled, is short in length, and covered with hair, especially toward the tip. 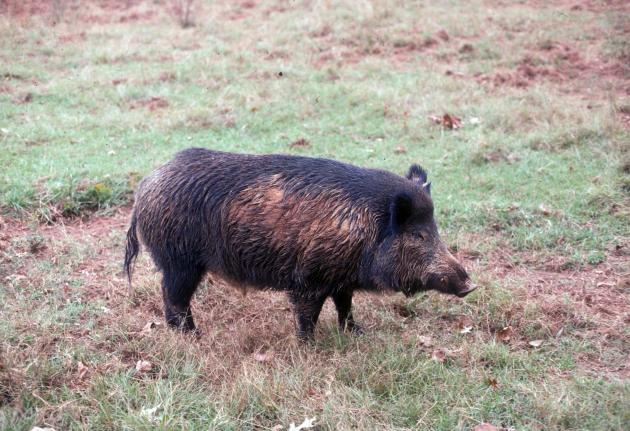 The observed range in total or intact body weight among feral hogs is one of the most variable parameters from population to population.  As a species, Sus scrofa has the potential to reach very large body weights.  Feral hogs are born at approximately 2 lb in weight (range of 1 to 4 lb).  The average adult body weight of a feral hog is approximately 180 lb.  Males are slightly bigger, with the comparable body weights for adults of each sex as follows: 150-170 lb for females, and 200-220 lb for males.  Exceptional specimens have been reported to exceed 500 lb.  In most instances of these exceptional weights, the animals were males.  Recent reports of harvested feral hogs exceeding 1,000 lb have turned out to be capture-reared boars that were either released or escaped into the wild before being killed.  The growth in body weight among feral hogs continues until about the fifth year of life, where after it decreases with advancing age.

Similar to body weight, the external dimensions or sizes of feral hogs are also highly variable.  Adult feral hogs average 5-6 ft in length (tip of nose to end of tail) and 2.5-3 ft in shoulder height.  Exceptionally large males can be over 7 ft in length and over 3 ft in shoulder height.  Examples of variation in other external dimensions in adult feral hogs include: tail length 5-16 inches; hind foot length 7-15 inches; ear length 3-10 inches; and snout length 6-14 inches.  Boars average between 5 and 9% larger than sows in these various dimensions.  Body length growth in feral hogs ceases at between 3 to 5 years of age.

Coat coloration observed among feral hogs is extremely diverse, varying from solid to mixed coloration patterns.  The simplest of these is the solid coloration, including black, red-brown, or white.  The next pattern is spotted or mottled, which is a mixed pattern of two or more of the aforementioned colors and is highly variable.  The most unique or unusual is the belted or shoulder band pattern (also called a Hampshire band).  The belted pattern has a base coloration of either black or some shade of red-brown, with a white band completely around the shoulder region and on the front legs.  Pure adult Eurasian wild hogs have a coloration pattern (called the wild/grizzled pattern) that includes a coat of light brown to black with white or tan ends on the bristles, especially over the sides of the head and end of the snout.  The face, cheeks, and throat are grizzled in appearance with white-tipped bristles.  The undersides are lighter, and the end of the snout, ears, legs, and tail are dark brown to black.  A distinct dark stripe can also be evident in the chest region of the back in adults.  Some wild Sus scrofa exhibit a striped juvenile pattern (Fig. 3), which changes to the adult pattern at between four to six months of age. 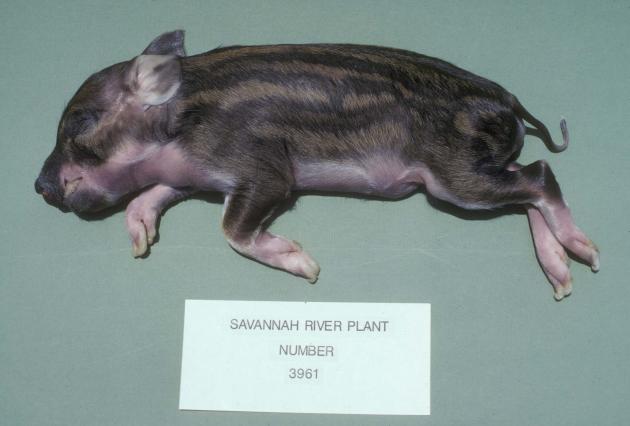 The coat is coarse and bristly, and can vary from sparsely to densely haired with respect to coverage on any one specific animal.  Some individuals exhibit a well developed mane along the neck, shoulder, and forward portion of the lower back.  Feral hogs have three general types of hairs, which include bristles, underfur, and vibrissae.  The presence, dimensions, density, and color of these three types of hair can vary widely with an individual’s age, among animals within the same population, between different populations and habitat types, and among the three general types of wild Sus scrofa.  Additional changes occur between seasons, with the bristles and underfur being shed during the late spring and summer months.

Feral hogs have a total of 44 permanent teeth. Both deciduous and permanent sets of teeth exist that erupt sequentially.  The permanent tusks (also called canine teeth) of boars are significantly larger than those in sows (Feral Hog Tusk Characteristics).  In addition, the shapes of these teeth differ markedly between the two sexes (Fig. 4).  Behavioral sex differentiation is the apparent cause for the sexual dimorphism observed in the permanent tusks of these animals. 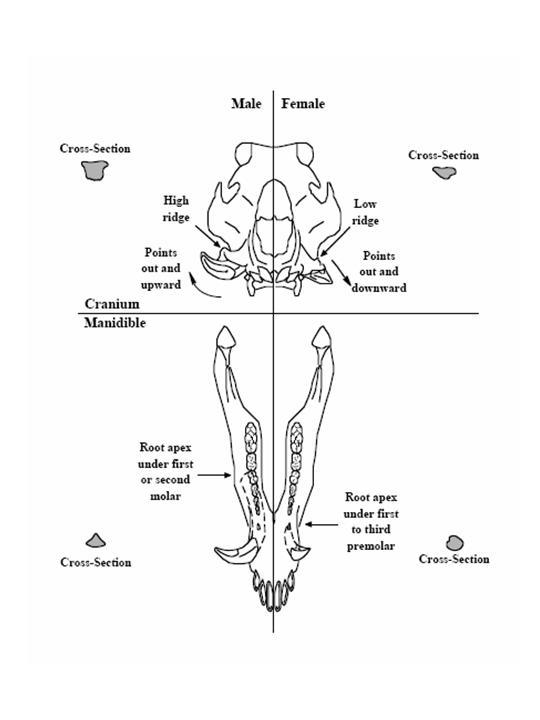 Figure 4.  Difference in appearance of upper and lower canines in adult male and female feral hogs.

The number of teats in feral hogs average 12 and vary from 3 up to 16.  The teats are typically arranged in pairs; however, staggered arrangements or supernumerary teats do occur that result in odd numbers of total teats on any one individual.

Male feral hogs possess a thickened subcutaneous layer of tissue, commonly referred to as the shield, which overlies the outermost muscles in the boar’s lateral shoulder region.  This unique anatomical structure serves a protective function for males during fighting with other males.  The shield initially develops with the onset of sexual maturity and can grow up to 2 inches thick in adults.

Feral hogs have a number of cutaneous glands.  Some of these are used in scent marking (e.g., metacarpal glands, preorbital glands, preputial gland, and tusk/lip glands).  In addition, these animals also possess proctoideal, perineal, mandibular/mental, rhinarial, Harderian, and genal glands.  All of these secrete or produce odorous compounds, which may or may not function in scent marking.

Two uncommon features found in feral hogs include syndactylous (also called mule‑footed) hooves and neck wattles (Fig. 5).  The syndactylous hooves are caused by a developmental fusion of the last bones of the two middle toes.  Externally, the fusion of those toes gives the appearance of a single, central-toed hoof similar to that found in equines; hence, the name mule-foot.  Neck wattles (also called waddles or tassels) are similar to the bell on the throat region of a moose’s neck, and consist of paired gristle protuberances or tubular appendages that grow out of the lower lateral portions of the neck.  Wattles are normally 2 to 4 inches in length and covered with hair. 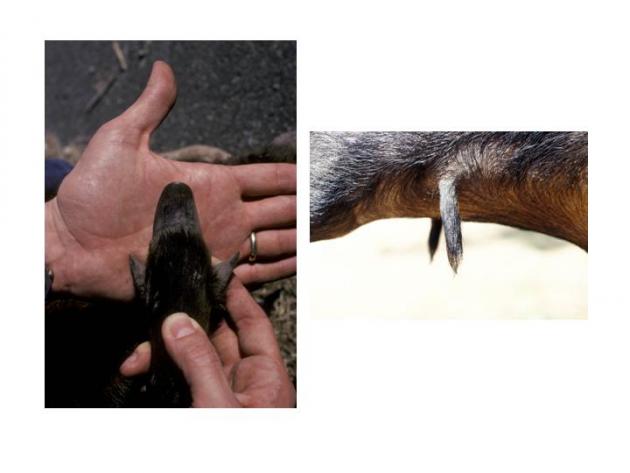