Similar to “mule-footed” hooves (Mule-Footed Feral Hogs), neck wattles are uncommon physical features that have been reported in feral hogs (also called wild hogs; Sus scrofa).  The presence of neck wattles (also called “waddles” or “tassels”) in these animals is neither widespread nor frequently observed even where they are known to occur.

Analogous to the bell on the throat region of a moose’s neck, these structures are gristle protuberances or tubular appendages in the hog’s skin.  Neck wattles in hogs are paired structures that grow out of the lower lateral portions of the neck.  Wattles are normally approximately 2 to 4 inches in length and 1/2 to 1 inch in diameter.  The entire structure is covered with hair (Fig. 1). 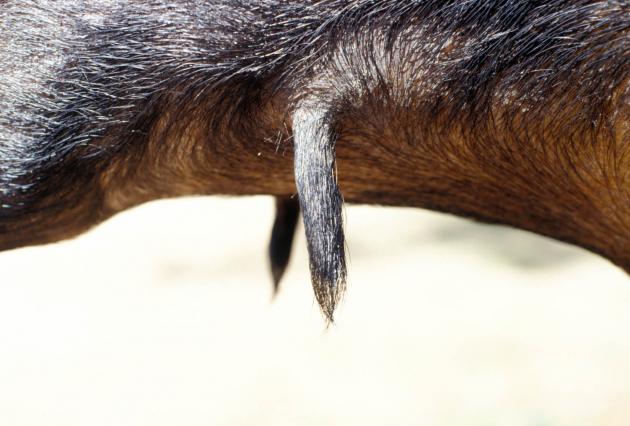 The “red wattle” breed of domestic swine reportedly originated in the south Pacific, and first appeared in the United States in either the 1700s or 1800s.  The breed has never been popular in this country, but did get some interest in the 1980s because of its reputation for having a lean carcass.  The presence of neck wattles has been noted in feral hog populations in Florida, South Carolina, and Texas.  Neck wattles are also exhibited by the feral hogs in New Zealand that are of Kunekune breed ancestry.  The populations in southwestern Florida exhibit both neck wattles and mule-footed hooves.  In general, neck wattles have only been documented to occur in feral hogs and wild boar/feral hog hybrids, but never in any pure Eurasian wild boar.