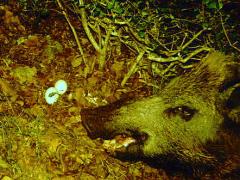 Feral hogs are often thought of as competitors with native wildlife.  Sometimes they cross over from competitor to predator.  Feral hogs are opportunistic omnivores, which means that they will consume whatever food source is available, including meat and eggs.  The eggs of ground-nesting birds, such as Northern bobwhite and wild turkey are particularly easy for them to consume, given their proximity to the ground (Fig. 1).

Over the last several decades, the Northern bobwhite has been steadily declining across its range. In an effort to root out potential causes, wildlife specialists have teamed with landowners and county extension agents to determine rates of predation in the Rolling Plains of Texas.

To aid this effort, simulated nests were constructed in Northern bobwhite habitat. In 1993 and 1994, 23.5% of simulated nests on a ranch in Foard County and 11.5% in Shackleford County were predated by feral hogs.  Findings from that study concluded that effects of feral hog nest predation were a factor in Northern bobwhite decline, and in the subsequent years hog numbers have increased dramatically in those areas, inferring an increased predation rate.

The Gus Engeling Wildlife Management Area located between Palestine and Corsicana, Texas, is 10,872 acres, and  was an eastern wild turkeys release site in the mid 1990s.  Released turkeys were fitted with radio trackers, and in time their nests located and monitored by camera.  Feral hogs were then determined to be one of several predators consuming eggs from the nest.  As a result, researchers increased control of feral hogs to reduce predation rates.  In 1998, 68 hogs were removed from the property and the rate of nest success was still 0%. In 1999, 313 hogs were removed and nest success was 25%.

While feral hogs are not the only predator of ground-nesting birds, their removal has clearly translated into increased nest success. There are certainly other factors that affect nest success, such as rainfall and natural predators, but removal of non-native, invasive predators such as the feral hog should be included in every ranch management plan.  It is also important to diversify methods of feral hog control,  which may include trapping, snaring, shooting, and the use of dogs.  Finally, it is likely that many other species not studied have experienced lower success rates due to predation from feral hogs, and their removal would aid in native wildlife recovery.