Feral hogs (also called wild hogs), belonging to the species Sus scrofa, are not native to the United States.  The presence of these animals in this country is solely attributable to man-made introductions, some of which were intentional while others were accidental.  Basically, two types of Sus scrofa, Eurasian wild boar and domestic swine, were introduced into the United States.  Because these two types are conspecifics, wherever both of them were found together in the wild, interbreeding occurred.  As a result, there are now three general types of wild hogs present in this country (Fig. 1).  However, because this situation represents a very diverse hybrid complex, the distinguishing lines among these three general types are not always clear morphologically; genetic analyses may be necessary to sort out the ancestry of any one specific population of unknown origin. 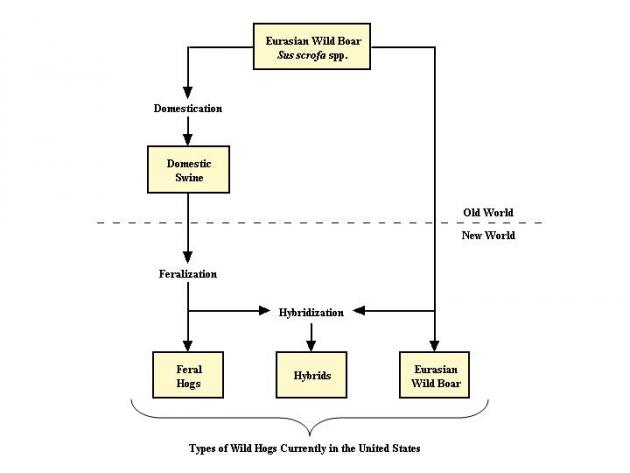 Historically, the first man-made introduction of hogs into the United States was on the Hawaiian Islands.  These animals were carried there by the early Polynesian immigrants who first colonized these islands.  Hogs were abundant on all of the islands within this archipelago at the time of the first European contact in the 18th Century.  The first hogs to be brought to continental North America were of European origin.  The first importation of domestic swine into North America came with the second voyage of Christopher Columbus in 1493.  Among the livestock acquired in the Canary Islands to provision this expedition were eight “selected” domestic pigs that were taken onboard at the island of Gomera.  These animals and their offspring became the stock that populated the newly formed settlements and outposts on the islands of Cuba, Hispaniola, and Jamaica.  From these animals sprang the immense herds that sustained the Spanish explorers on their journeys to the mainland during the early 1500s.  It was from these ambulatory stocks of swine used by these initial expeditions that the first well-documented feral populations of wild hogs originated in the continental United States.

The expedition of Hernando de Soto is attributed as the first documented source that introduced hogs into the continental United States.  From the initial stock of animals, De Soto’s herd of swine increased to a reported total of 700.  Over a three year period, De Soto and his army traveled through what are now 14 states.  Along the 3,100-mile journey, the hogs variously escaped into the wild and were either given to or stolen by the Indians encountered by the Spaniards.  De Soto was followed by many other Spanish, English, and French explorers and colonists that brought hogs to the continental U. S. (e.g., Pedro Menéndez de Avilés, Juan de Oñate, Pierre de Iberville, Fernando del Bosque, Rene-Robert Cavelier Sieur de La Salle, and Sir Walter Raleigh).  The escaped hogs from these various expeditions and settlements went wild and rapidly became established in a variety of areas.

Among the domestic livestock being raised in the early settlements in the European colonies in the New World, hogs were among the most common.  The free-ranging of domestic livestock, including hogs, was a commonly practiced husbandry method employed in these colonies.  Often, these free-ranging domestic swine went wild.  Combined with the escaped stock from the earlier expeditions, these animals established the early populations of wild hogs throughout the eastern and southwestern United States.

Beginning in the 1890s, pure Eurasian wild boar were introduced into several areas of the United States to provide a new huntable big game species for wealthy sportsmen.  All of these initial introductions were into fenced shooting preserves (e.g., Corbin’s Park, NH; Litchfield Park, NY; Hooper Bald, NC).  Many were followed by secondary introductions into other locations.  A number of these later releases were made into unfenced areas.  In other instances, the wild boar were able to break out of and escape the fenced enclosures where they were being maintained.  In such areas where feral hogs were already established, interbreeding between the two forms readily occurred, further complicating the taxonomic composition of the wild hogs found in those areas.

From 1900 until the late 1980s, feral hog populations in the United States were primarily found in the southern tier of states and in states on the West Coast.  Between 1989 and the present, the number of states reporting the presence of feral hogs has more than doubled.  Similar to the initial introductions of this species into this continent, this new range increase has also been man-made.  Concurrent with this range expansion has been an increase in the estimate national population size of this species.  The range expansion in the central part of the country was reportedly largely due to clandestine releases by feral hog hunting enthusiasts. In most states the practice of releasing hogs is highly illegal.  Other expansions have been the result of these animals escaping from fenced shooting preserves.  The identified sport hunting sources (i.e., clandestine releases and escapes from fenced preserves) of this species increase are consistent with the fact that feral hogs have become the second most popular big game animal in North America, second only to white-tailed deer (Odocoileus virginianus) in the numbers harvested every year.  Because of continuing illegal releases of feral hogs into new areas, the number of states with these animals will probably increase.  In fact, the potential exists to ultimately have introduced populations of feral hogs in all 50 states at some time in the future.