Feral hogs (also called wild hogs; Sus scrofa) are characterized by high reproductive potential, with a young age at puberty, large litters, and frequent breeding.  The recent expanding range of this non-native species provides evidence of its high reproductive capacity.  In general, the various aspects of the reproductive biology of feral hogs in the United States are intermediate between that of domestic swine and the Eurasian wild boar.  However, these various reproductive parameters can vary widely between populations of these non-native animals due to both genetic and environmental factors.

Female feral hogs can reach sexual maturity as young as 3-4 months of age; however, most wild sows reach puberty by the time they are one year old.  Females of this species are polyestrous, being able to come into estrus every 18-24 days if they are not successfully bred.  The ovulation rate typically averages 7-8 shed ova but can range from 3-15.  Uterine implantation is biased toward left horn but is typically not significant.  The feral hog’s gestation period averages 112-120 days and can vary from 100-140 days.  Fetal litters in feral hogs average 5-6 embryos/fetuses and range from 1-14.  The observed intrauterine mortality in this species is approximately 30%.  In general, fetal litters are often male-biased, but this sex composition is normally not significant.  There is also an observed shift from male-biased to female-biased composition as the litter size increases.  The ovulation rates, litter sizes, and pregnancy rates all increase with the sow’s age.  Both the nutritional input and reproductive output levels in feral sows are also positively correlated.  Sows build a farrowing nest within 24 hours prior to giving birth to provide protection for their offspring (Fig. 1).  The newborn or neonatal litters in feral hogs average 4-6 piglets and can range from 1-12.  Similar to the newborn litter size, the number of lactating teats per sow averages 4-6 and varies from 1-12.  As such, the number of lactating teats is highly correlated with the number of piglets in the sow’s litter.  The litter size in feral sows reportedly decreases after about the 5th-7th litter or 4-5 years of age.  The oldest known feral sow, which was documented to still be capable of breeding, was 14 years of age.

Figure 1. A feral sow in the farrowing nest with her newborn litter of piglets.

Similar to the females, male feral hogs are sexually mature as young as 4-5 months of age, and most boars reach puberty within the first year of life.  In general, most boars participate in breeding by 12-18 months of age.  The testicular weight in feral hogs increases until 3 years of age, and then decreases after 5 years of age.  Boars compete in male-male fighting for breeding opportunities with females.  Mature boars develop shoulder shields of thickened subcutaneous tissue that protects these animals during male-male fighting.  Such fights can be intense, with either or both combatants getting injured, or possibly even killed.  Because success in these fights is related to size, most breeding done in feral hog populations is by the larger and older males.  Multiple paternity of feral hog litters does occur but is reported to be very uncommon.  Reproductive activity can also affect the weights in these animals during certain times of the year.  For example, the body mass of mature boars has been reported to drop during the breeding season, with some individuals losing up to 20-25% of their body weight.  This is due to a combination of increased testosterone production and the resulting reduced foraging done by these boars at that time.

Reproduction in feral hog populations can occur during any month, with both sows and boars being capable of breeding year-round (Fig. 2).  Typically there are 1-2 seasonal peaks in breeding.  However, annual patterns with one or two seasonal peaks can occur within the same population, varying from year to year.  Regional photo-period, rainfall and nutrition all influence the breeding season in a feral hog population.  Feral sows are capable of producing more than one litter per year.  The production of a second litter was observed to be common when sows lost the entire first litters; however, sows have been breeding while still nursing a litter of piglets.  Normally, sows do not conceive when still nursing a litter of piglets.  In eastern Tennessee, numerous wild sows were observed to have bred within a month of farrowing, however, very seldom did these females conceive.  In addition, when these sows did conceive, only very small litters were produced.  Production of multiple litters is more common when food resources are abundant.  It is also more common among adult wild sows than younger sows. 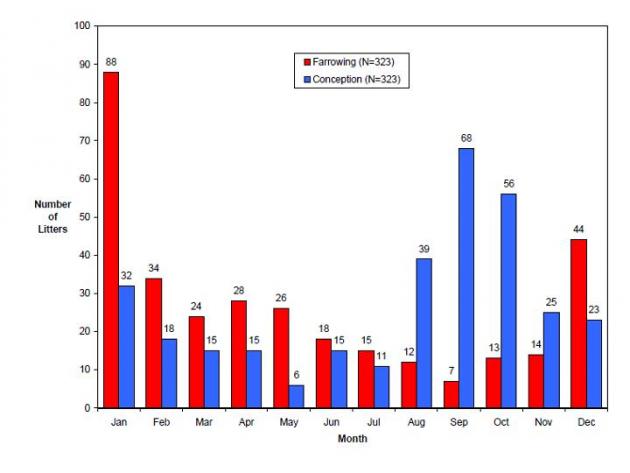 Figure 2. Monthly numbers of conceptions and farrowings in a feral hog population in South Carolina.  Based on a sample size of 323 litters.