The population biology of feral hogs (also called wild hogs; Sus scrofa) is unique among most large mammals, in that these animals have a high reproductive potential combined with a high mortality rate.  Populations of these animals have been reported to fluctuate in response to a combination of several factors (for example, density, food availability, severe weather conditions, disease outbreaks, and hunting).  Such external influences can result in high levels of mortality occurring within these populations.  However, because of their high reproductive potential (see Feral Hog Reproductive Biology), feral hog populations are resilient with the ability to rapidly recover from such dramatic reductions.  Understanding the basic population biology of this invasive species is fundamental to being able to successfully manage or control local numbers of these animals.

Fig. 1 shows the sex and age class composition of a typical feral hog population.  The overall male-to-female ratio is typically not significantly different from 1-1. The high reproductive potential is illustrated by the broad base to this population pyramid, showing that most hogs in a population are in the younger age-classes. 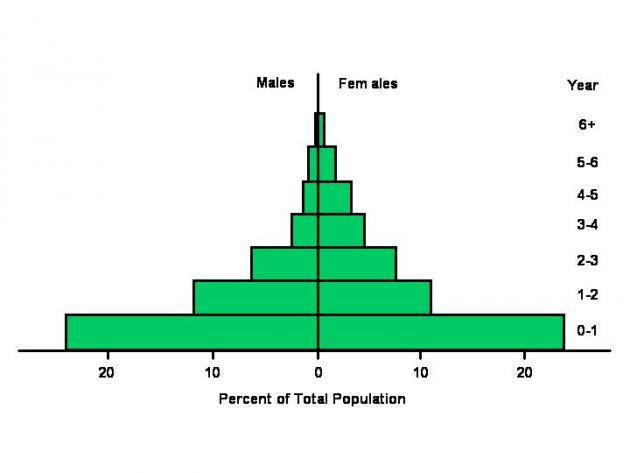 Feral hog densities (that is, the number of animals in a given area) are often between 2 and 8 animals/square mile, but densities as high as 288 animals/square mile have been reported.  As in other wildlife species, density in any one area is determined by a set of local variables that collectively define the area’s carrying capacity.  For feral hogs, such variables would include presence of surface water, habitat, climatic conditions, food availability, and level of predation (both natural and man-made).  From a long-term perspective, the most critical of these variables is probably water, such that the local absence of some form of available surface water will effectively prevent feral hogs from existing in that area.  In general, higher densities are seen in wetter, forested areas while much lower ones are reported in arid, shrub-scrub habitats.  With respect to varying climatic conditions, the winter and spring temperatures are positively correlated with feral hog density, while the amount of snow depth is negatively correlated with the density of these animals.  Given the link between food and reproduction in this species, as food availability is enhanced, reproductive success increases; this then results in an increase in density.  In natural situations, forage resources are strongly tied to both habitat type and climate.  Although natural predation typically plays a minor role, the harvest by man can have a noticeable impact on the feral hog density within a given area.  For example, lower densities have been reported in intensely hunted areas as compared to lightly or unhunted areas in California.

In general, feral hogs, as well as other species within the swine family Suidae, are unique among the large mammals in that they have a high birth rate combined with a high mortality rate during the first year of life.  Estimates of 80% or higher mortality within the first year of life have been reported for these animals.  Between the first and fourth years of life, the year class-specific mortality rates drops to about 30-40%, with the greatest life expectancy in the 1 and then 2 year old animals.  From the fifth year on, the annual mortality rate increases to 50% or higher.  Typically, most feral hogs do not live more than 6-8 years in the wild.  The maximum lifespan is estimated to be 9-10 years of age (Fig. 2), with exceptional instances of individuals reaching 12-14 years.  The high mortality rate among the younger age classes in feral hogs results in reported average longevities varying from 9-26 months of age.  Although variable, in most instances, the reported life expectancy for boars is slightly shorter than that for sows. 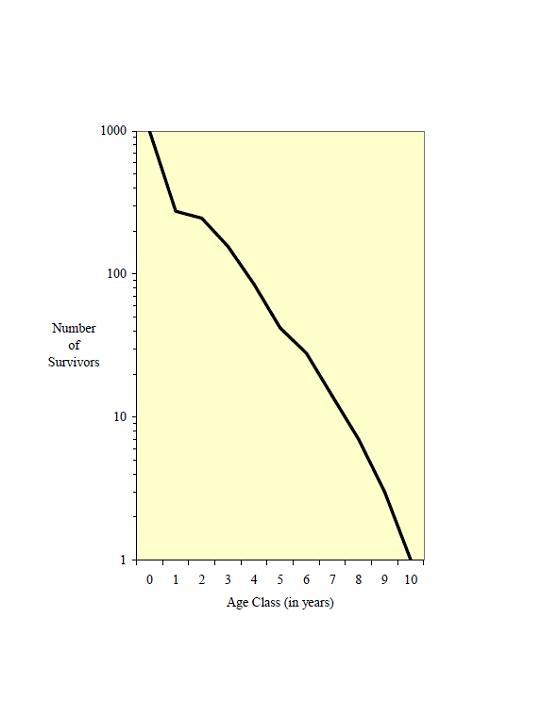 Figure 2.  Survivorship curve for a typical feral hog population.  A survivorship curve is a graph showing the number of individuals from a given cohort that survive at each year of life.  This graphs shows that, out of 1,000 animals that are born (Year 0), about 10, or 1%, are expected to live to 8 years of age.

As stated previously, feral hogs have a very high reproductive potential. Because of this, populations of these animals have a great capacity for increase, even when the mortality rate of young is high.  In general, litter size in feral hogs is positively correlated with age of the sow.  The first one or two litters are smaller than the subsequent litters.  In addition, it has been reported that litter sizes and the proportion of feral sows that were pregnant varied from year to year and were higher in good mast years.  Typically, sows in most feral hog populations produce between one and two litters a year.  Physiologically, feral sows should be capable of producing three litters in a 14-16 month time period.  This has been documented to occur in captive animals, but never in wild females.

The mortality rate in feral hogs is variable but very much related to age.  Most mortality is known to occur between birth and 1 month of age.  Depending upon the various extrinsic factors impacting a specific population, the mortality rate can be highly variable between the sexes and among the age classes.  The causes of mortality in feral hogs can be either natural or man-made.  The natural causes would include accidents and injuries, starvation, predation, parasites, diseases, and tooth deterioration.  Man-made causes of mortality among feral hogs can be significant and include hunting, trapping (corral or cage trapping, snaring), poisoning (where legally permitted), and vehicle collisions.  In general, more hogs typically die from man-made causes than from natural causes.

Although largely sedentary, feral hogs can be very mobile and disperse long distances.  Dispersal can involve either individuals or groups.  Hogs may disperse as they become sexually mature. In addition, dispersal may be related to changes in habitat, density, and hunting pressure. In general, dispersal distance in this species has not been found to be correlated with population density.

Because of the high reproductive potential of feral hogs, it is necessary to remove 50-70% of the population annually to keep the numbers stable to decreasing.  For both economical and logistical reasons, that is rarely achieved year after year.  Thus, land owners should plan for long-term control and damage abatement programs to keep feral hog populations in check.